If you are not familiar with matrix algebra you may like to look at the following pages first:

In the applications section it is important to realise there are different standards and conventions and therefore it is a good idea to familarise yourself with the standards used on this site:

So to give a more specific example if:

Matrix Differentiation with respect to another Matrix

Since division of one square matrix, with non-zero determinant, by another will give a result (unlike vectors) we can define differentiation with respect to another matrix.

What are the rules of such differentiation? What applications does it have? 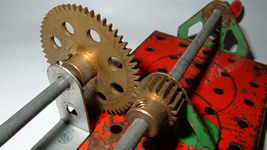 Could we use it in this situation? Imagine that two matrices represent the angular position of two gears, can we differentiate one with respect to another to get the ratio of the gears?

There are more complicated types of differentiation, for instance the Jacobian which gives all combinations of the partial differentials of elements of the vector with the other elements.

This is related to vector calculus such as grad, div and curl.

Here we are considering the simple differentiation of a matrix at the top of this page. However, when we start to look at applications it becomes less simple.

For instance, with linear movement we just use v = dx/dt and we treat velocity v as being the same thing as dx/dt but with rotation the equation is more complicated:
[~w]*[R(t)] = [d R(t) / dt]

This is also discussed on the angularvelocity page and in particular Mark Ioffe was kind enough to send me a proof of this, see this page.

What I want to do is understand the deeper reasons for this extra complexity. I think this involves these factors:

We want the object to be rotating at a constant angular velocity of 'w'. Therefore we replace the angle 'a' with w*t as follows:

So if we differentiate this with respect to time we get:

So, as already described, this is a time varying quantity even though it is rotating at a constant angular velocity. However we can factor this matrix as follows:

so if we let

So we now have a non-time-varying matrix to represent angular velocity.

In other words, if we take a fixed point on an object, and transform the object by multiplying it with a rotation matrix, which is a function of time, then we will get a vector which is rotating as defined by the matrix.

If we want to get the velocity of this vector then we need to differentiate the matrix t give,

As with differentiation we can integrate a whole matrix by individually integrating each element. So if:

In geometry a linear function has the form of a straight line graph:

In algebra we often use the term linear function to refer to a function of the variable multiplied by a scalar value without any constant offset:

This is useful when we extend it to simultaneous equations of more than one variable.

These equations can be represented by a single matrix equation.

Simultaneous equations are explained further on this page.

Matrices are explained further on this page.