Intuitionistic or constructive logic is similar to classical logic but where the law of excluded middle is not used.

The implementation starts with a 'free logic algebra' that is an algebra where each combination of inputs to /\ , \/ and ¬ generates a new element. So an expression like T /\ T is just T /\ T and does not simplify.

Then by adding "simplification rules" (should I have called them relators?) then other logic algebras can be implemented (intuitional, ternary, many-valued, boolean) just by adding the "rules".

These "rules" are hardcoded into the /\ , \/ and ¬ implementations (rather than implementing a true rule based system).

An option to generalise this code might be to implement the 'free logic algebra' as a category, then intuitional, ternary, many-valued, boolean could be domains which overload /\ , \/ and ¬ with their own sets of rules.

Note: Please be aware that changes may be made in the future to improve and correct intuitionistic logic domain, such as:

If you have an uptodate version of FriCAS then the intuitionisticLogic domain is already installed. The source code is in a file called logic.spad, which is available here.

Download and compile in the usual way. Make sure it is exposed since Axiom/FriCAS was started.

Intuitionistic logic has many possible values: true "T", false "_|_" and infinitely many other values generated by constructs such as inverse. These can be constructed as follows:

This logic has different rules from boolean algebra and all constructions do not reduce to true or false. To test out our constructs we will use the following list where a and b are independent propositions so that we can check how they interact:

First we will try 'not':

We can print a truth table for 'and' and 'or'. This is the same as boolean logic for true/false values and extended for the unproven case. 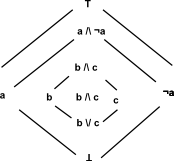 Now that we can do intuitionistic logic with constant values we can go on to represent theories. We can enter a symbolic value as follows:

When applying a symbolic value, then it may not possible to compress as a single node, so the result remains as a tree. So (13) can be reduced to a single value _|_ because the result does not depend on 'a', however in (12) we cannot reduce to a single value.

We now apply the deductions function to this list.

so we get the required deduction 'b'

Intuitionistic logic can be coerced to and from SKI combinators. For a tutorial about how to coerce to/from this algebra see this page.

For more information about notation see this page.