There is no need to follow this page just to run FriCAS, to install FriCAS from a binary see this page here, use this only to modify the program or if you are using it on an unusual platform. This is my attempt to compile the program from source.

First, as instructed in the install notes, I found and installed a suitable version of lisp. I am curous how the FriCAS binary runs without lisp? I assume the lisp is included in the binary?

Anyway I ran YaST2 and found a lisp interpreter - clisp, this is one of the accetable prerequisities listed in the install notes, so I installed this.

I ran configure and make using the following script:

Here is the detail

so I typed make as instructed:

Then I ran make install as root:

I proably did not set the directory names or structute very efficienly so, at this stage, I had to move and rename the directories so that they are in the same form as the binaries from the FriCAS distribution.

When I run this newly compiled version of FriCAS it appers to run correctly but very slowly compared to the binaries from the FriCAS distribution. When it is running there is a process AXIOMsys which is taking 100% of one CPU core.

Is this because I used CLISP to make it rather than SBCL?

This page is about compiling Fricas, it is part of a set of pages devoted to my experiments with open source computer algebra programs in this case FriCAS. These page start here where I have put some information about computer algebra systems.and the FriCAS pages start here. 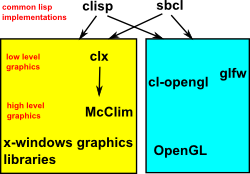 Although the Axiom/FriCAS computer algebra system is written in Lisp, users of the program don't need to know Lisp. The SPAD (a contraction of Scratchpad) language is used when we want to implement custom algebras and mathematical structures.

For more information about the SPAD language see page here.