We usually understand Physics as the study of the structure of the world and the way that things behave and interact in it. Mathematics is a more abstract system which is studied for its own sake but is also needed to encode our physics laws.

Often we can think of mathematics as a toolbox, where we have a choice tools for a given job, for example if we want to combine rotations in 3 dimensions we have a choice of using quaternion algebra or matrix algebra. Both of which will give the required result.

I get the impression that modern physics is blurring this distinction in that Physics theories tend to be purely mathematical these days, even the inventor/discoverer does not understand them intuitively and some theories like Noether's theorem seem to bridge Maths and Physics.

However maths and physics have a different philosophy; a different was of assessing theories. For a mathematical system to be accepted, it only has to be self-consistent, it does not have to apply to any practical problem. For a physics theory to be accepted it needs to represent the real world, it doesn't matter how beautiful the theory is, if it does not give the correct results, its no good. So, for example, a photon may be represented as a wave in some circumstances and a particle in other circumstances but provided we get the correct results this is more important than consistency.

This process of abstraction seems to involve searching for a pattern and then encoding it then, in the case of physics, checking against reality.

There was quite a good television program by David Malone about some of the great mathematicians broadcast by the BBC recently. It started with this quote:

The program is suggesting that the subject of infinity has contradictions at its heart (ironic then, given the importance of constancy to mathematics). I'm not sure if calculus is built of firm foundations given that it depends on taking an infinite limit? Some mathematical notions, such as 'the set of everything' are inherently self-contradictory, but are subjects which are based on infinity (like calculus) based on firm foundations?

There are gaps in mathematics around the subject of infinity (has the continuum hypothesis been proved or disproved yet?)

This is where I get accused of being a crackpot (if you don't think so already) but we could argue in Physics, things may appear to be inconsistent due to the limits of our knowledge and intuition and the apparent strangeness of quantum theory but there aren't fundamental inconsistencies at the heart of the subject. For example, physics does not have infinites, either infinitely large or infinitesimally small. Dimensions may be very large but finite between the limits of the big bang and the big crunch. At the very small scale, things can't get infinitesimally small, at the scale of atoms things start to get 'fuzzy' so we don't have an infinite amount of structure.

But what about calculus? This was invented to solve physical problems but it is based on the concept of infinity and therefore potentially inconsistent. For instance, velocity is the limit of distance divided by time as these quantities become infinitesimally small, this will give the precise value of the velocity at a given point. However the Heisenberg uncertainty principle says that there is a limit to what we can know about the velocity and position of a particle so again we are saved from the need to take the final step of making the quantities infinitely small.

I'm not suggesting calculus isn't useful in physics, its a useful fiction, but we don't have to make the quantities infinitely small, just very, very small.

So where else does infinity occur in physics? What about quantum entanglement, does this allow particles to communicate instantaneously? Are we protected from the consequence of this at the large scale by quantum decoherence?

In physics we have equations like T= r × F which apply independently of the origin and direction of the coordinate system that we are using.

Different types of algebras like Clifford algebras and Tensor algebra give us alternative ways to bridge between the high level (coordinate free) and the coordinate specific layers: 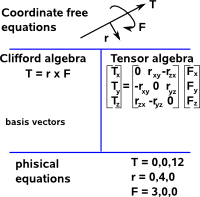